Getting more comfortable with injecting.
If you have concerns about using an injectable medicine for your diabetes, you’re not alone. Many people living with diabetes have a fear of injections. Learning more about needles may help you get over the hurdle of injecting.

Why one needle might be a better fit than another.
Needles come in all different sizes—there are a lot of options to choose from. Health care providers and pharmacists can help recommend the right needle for you. Here are some things you should know: 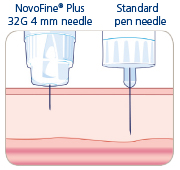 NovoFine® and NovoFine® Plus needles—some of the shortest and thinnest needles available from Novo Nordisk.

Disposing of needles responsibly.
Used needles should never be thrown away with ordinary trash. Doing so could lead to accidental needlesticks. Instead, dispose of them in a special “sharps” container, or a puncture-proof, clearly marked container, like an empty detergent bottle. Dispose of them in accordance with your local health regulations. Needles like NovoFine® Autocover® are designed with a safety shield, which helps prevent accidental needlesticksa; however, all needles should be disposed of as outlined above.

aNeedlesticks may occur at the needle base.

Cornerstones4Care® gives you support and management tools built around you, wherever you are in your diabetes journey.

Find out if you are eligible for a FREE box of Novo Nordisk needles.